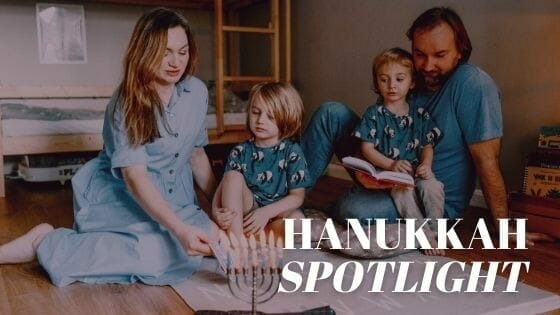 Chanukah (or Hanukkah) is a Jewish tradition that lasts for eight days each year. For 2020, it runs from December 10-18. The word means “dedication” and celebrates the Jewish rededication of the Holy Temple. Let’s learn more about the history of Chanukah and popular traditions:

In the second century BC, the land of Israel was ruled by Syrian-Greeks who wanted to force Israelites to accept Greek culture instead of their observance of God. A small group of Jews defeated the Greeks and drove them from the land, then reclaimed their Holy Temple in Jerusalem and rededicated it to God.

When they went to light the menorah at the temple (a seven-branched candelabrum), they found one single jar of olive oil that escaped the destruction of the Greeks. By an unexplainable miracle, the one-day supply of oil lasted them eight days and thus the festival of Chanukah was birthed.

The lighting of the menorah each night is the heart of Chanukah. A traditional menorah holds nine flames, one of which is the attendant flame that sparks the other eight lights. One candle is lit the first night, two the second night, and so on until all eight are shining on the last night of the festival. It is typically placed in a doorway or window and menorahs are also lit at Jewish synagogues and temples.

Since oil was part of the first Chanukah miracle, foods fried in oil are a customary staple. Fried potato pancakes (also known as latkes), donuts, thumbprint cookies and applesauce are all traditional recipes consumed during the festival of lights.

A popular game during Chanukah is the Dreidel game. It is typically a four-sided spinning top with Hebrew letters on each side that translate to “a great miracle happened there”. Prizes may include coins or nuts.

Chocolate gelt, or coins, is often distributed to children during the celebration. This mimics the early Eastern European tradition of Jewish families giving extra coins to teachers and other independent workers as a sort of end-of-the-year tip. This evolved into teaching children the importance of giving and is now more commonly given as a gift from parents or grandparents to children.