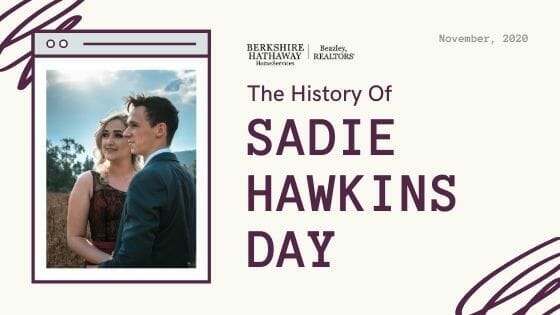 The History of Sadie Hawkins Day

It’s likely that you’ve heard the name Sadie Hawkins at some point in time. If you aren’t familiar with the time-honored tradition, it’s typically known as a day where women ask men to a dance to reverse the typical role of the man asking the woman. Sadie Hawkins is typically celebrated on November 13 of each year and some schools host dances to honor it. Curious as to how Sadie Hawkins got started? Here is a little bit of history behind it.

Al Capp, the cartoonist behind the comic strip “Li’l Abner” from the Great Depression era and the decades following, is credited for the origination of Sadie Hawkins. She was never a real-life person to base this day off of, but instead a fictional cartoon that is now outdated. Her character was a homely southern woman whose looks weren’t particularly attractive (according to Capp’s drawings). In the comic strip, Sadie’s father was ready for her to be married and out of his hair, so he set up a race for the men in the area. Sadie was to chase after them, and whoever she caught was legally bound to marry her. Yikes! The comic strip debuted in 1937 and there was a Sadie Hawkins Day declared by the University of Tennessee in 1938. For some reason, the cartoon struck a chord with American women at the time who were tired of waiting around for a man to ask them out. It gave them the freedom in an otherwise-taboo time to ask the men for once.

The Sadie Hawkins Day hosted by the University of Tennessee was originally a bit of a joke, but by 1939, there were over 200 colleges across America planning a dance based off of the comic. There were women in over 180 cities that were finally able to ask the men to dance and build their confidence. From there, high schools and churches also began hosting Sadie Hawkins events with their own twist.

Back in the day of Sadie Hawkins’ beginning, a woman asking a man to dance would be seen as a bit of a progressive stunt. This is what made it gain so much popularity as the tradition it is now, because it helped empower women to speak up. The idea of women asking men out today is much more common than it was in the 1930s.

America Recycles Day
Where to Shop for Matching Family PJs