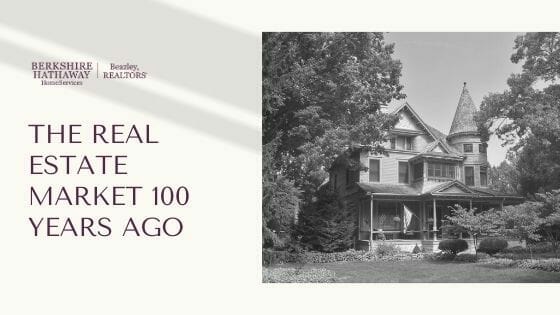 What Was the Real Estate Market Like 100 Years Ago?

Our world is constantly growing and changing at the drop of a dime. In just a few short years, the real estate process has gone mostly virtual thanks to the internet and a speedy market. Do you ever wonder what it was like before computers and smartphones? Here’s a quick look at the history of real estate in years past.

Between 1900 and 1950, over 15 million immigrants came to America. They mostly settled in larger cities, bringing city planners to build more apartment complexes, houses and other types of residential living. Developers decided to maximize space to help accommodate the rising costs and demand, so skyscrapers got their start. Builders started extending residences upward instead of out.

Due to the Spanish Flu Pandemic and World War I in the 1910s, real estate prices and the market went through a rapid decline. Most new families and homeowners were in the age group of either those who had casualties from the war or passed from the Spanish Flu. This hindered the family formation for years, which in turn meant less demand for houses and lower building costs.

An interesting tidbit about real estate in the early 20th century is that the Federal Housing Administration didn’t come about until the 1930s, meaning there was no such thing as a 30-year fixed mortgage. There were also no laws in place to disclose issues in the house, such as structural damages.

There were no buyer’s agents the way we know them today- in the 1920s, your broker, insurance agent, appraiser, lender and builder could have all been the same person!

Only 1% of American homes in 1920 included both electricity and indoor plumbing. These were huge selling points for homes as they were viewed as a luxury during that time.

Isn’t it interesting to see how things have changed for real estate in the last 100 years?